An evening of strong, independent women!
EG Kight had done a writers round in Nashville with Etta Britt last January. And EG first heard the women of Kentucky Thunder perform live in October, and became an instant fan. So when she was invited to open for them at 3rd & Lindsley, she was thrilled!
Join us for an evening of eclectic music, by five amazing performers – Etta Britt, Jonell Mosser, Vickie Carrico, Sheila Lawrence, and EG Kight! 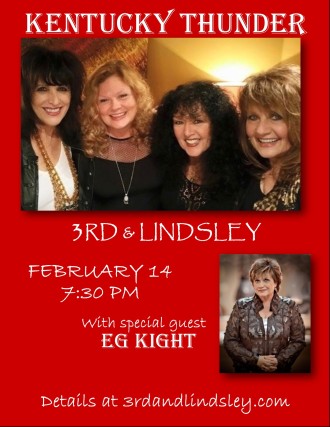 Most people who know EG Kight know that she’s an animal lover. Her herd of goats are her “kids.”
And Kight lends her talent for a Fundraiser for Companion Animal Rescue, Inc. (C.A.R.I.) Saturday, October 20 in Madison, Georgia. Details at http://serenatafarm.com
Call for more info 706-818-0144
https://www.facebook.com/events/238320243494176/
C.A.R.I. is not a shelter, but rather a foster program.
The foster care system affords animals a greater opportunity to find a loving, healthy home.

Sunny Stephens has always had a passion for the written word. Several songs she co-wrote have been recorded by major artists. “Fuel to Burn” can be found on Koko Taylor’s Grammy-nominated Royal Blue album, “Somewhere in Atlanta” landed on the Biltmore Estates Celebration of Jazz and Blues compilation, and “Blue Dawn” aired on ABC Family’s The Fosters. Stephens has spent 30 years in music management, working with blues artist EG Kight. Stephens is also on the board of Encephalitis411.org, a brand new non-profit organization, whose primary mission is to raise awareness about Encephalitis, a rare and often fatal disorder.
http://www.SolitaryLogic.com

Debra Zemke is a songwriter and music publisher in Nashville, TN. Songwriting since 1992, she currently has over three dozen published and recorded songs. As a songwriter her dream is to move people emotionally and inspire them to never stop dreaming. Deb has had the honor to write, work, and record with some of the best in the music industry, including Sara Evans, George Clinton, Rich Fagan, Eddy Raven, and more. She believes it is our relationships that make the magic in our lives, and that includes the relationships with our pets.
http://www.HeadSouthMusic.com

Karen Trotter Elley’s inspirational essays have been published in newspapers and magazines across the country. She and her husband Michael live in the Nashville, TN area where Karen is busy writing her memoir. She has recently completed a screenplay based on “The Messenger,” and can often be found on stages at retirement homes, making audiences laugh as a “senior humorist”.
https://www.facebook.com/karen.elley

In conjunction with The Galaxie Agency…

And the back story –

Nearly 20 years ago, when EG Kight decided to switch from country music to the blues, I had to take a crash course, and learn all I could about the genre.
I found myself at the club, listening to Stacy Mitchhart and his band live, as often as I could.
He and his band taught me what I needed to know.
Clearly Stacy is a master of his art, and he just keeps getting better with age…

On March 22nd, Stacy Mitchhart is joined on the City Winery Nashville stage by several artists making their own marks on the genre. City Winery is one of the city’s premier listening rooms.

Up-and-coming 30 year old Jarekus Singleton, who, according to Living Blues Magazine, is “fearlessly dedicated to breaking boundaries and blazing new paths” melds hip-hop, rock and R&B grooves with contemporary and traditional blues, turning audiences of all ages into devoted fans.

And Christone “Kingfish” Ingram, a 17 year old multi-instrumentalist, presents his take on the blues with the passion and fire of the much older men who created the genre. Born in the Delta, Kingfish started playing drums at age 6, then learned bass and lead guitar, and has performed at various venues already, including the White House.