With years of stage experience that belie her youthful appearance, Ohio native Caitie Thompson is an old soul whose love of music runs deep. A singer/songwriter and multi-instrumentalist, with her feet firmly planted in contemporary music, writing, and performing, she has also spent several years teaching music, and was the interim Music Director at a Nashville area high school. 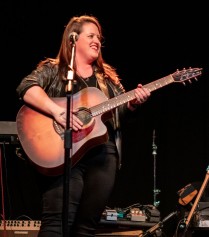 Just after college Caitie played in a band for a while, then started doing a duet with her sister, Leslie, performing as the “Lucky Penny Sisters.” In 2015 they released their first EP by the same name, with all songs co-written by the sisters.

In 2017, she released her first Solo EP, “Enough,” with more original songs. She played every instrument on the record, and sang all the vocals parts. A standout on the EP is “Choose Love,” inspired by the all-too-often news headlines of gun violence. It’s often been said that there’s no better way to work through the pain than to write about it, and this song has moved audiences deeply.

Not long after arriving in Nashville in 2018, she quickly became a sought-after musician, and has co-written with songwriting veterans Kelli Johnson, Jan Buckingham, Scott Barrier, and Donna DeSoppo, as well as up-and-comers Jenny Teator, Sheridan Gates, and EvyIvy. And “I’ve Gone Crazy,” a song co-written with Bobbi Holiday and Danielle Todd, was recorded by Danielle, and landed on the Billboard top 100 country charts in Canada and Australia.

Caitie has opened for Sarah Potenza, EG Kight, Elliott Lewis (Hall & Oates), Arnett Howard & the Creole Funk Band. She has performed at the Venice Blues Festival in Florida, and was the headliner for Delaware Arts Festival, and the Old Time Farming Festival.

Splitting her time between Nashville and Ohio, when she isn’t writing or performing, Caitie teaches music to young people. She has held private lessons in various studios, and even teaches by skype.